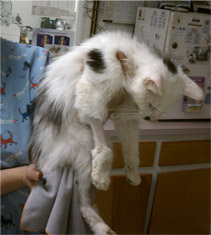 In October of 2011 a very kind man brought a dying kitty to our clinic. Mr. Brown was walking some land that he owned in Goochland County and came upon a severely injured cat lying next to a pond. The animal was unable to rise and could barely pick up his head or utter a meow. As he came closer, he saw that the kitty’s rear end had been mauled and the tail (with bone exposed) was covered in maggots! There were a few other areas infested as well.

Mr. B decided that he could not leave the cat there to suffer and die and chose to bring him to Goochland Animal Clinic to likely “put him out of his misery.” His regular Veterinarian was in Richmond, but he wasn’t sure the cat would last long enough to survive the trip to town. 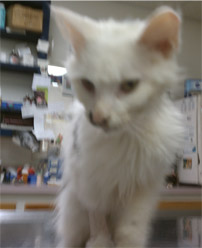 When he arrived at GAC, Richard helped carry “Mo” back to the exam room. A quick glance told Richard all he needed to know– that euthanasia was likely. Mo was just a barely breathing carcass– bones with skin stretched over, a horrid stench from the gangrenous tail and maggot infestation.

As Richard laid him gently on the exam table, Moses picked up his head and “bumped” or nudged Richard. Those of us cat lovers know that the gesture was affectionate and one that a cat makes when he is happy, content, or in this case, asking for mercy from a friend. Wow! Richard went to Dr. Washburn and said, this kitty is in bad shape, here to be put to sleep– but I think he deserves a chance.

Dr W’s exam revealed an extremely emaciated 4 pound cat with severe anemia due to the injury and subsequent blood loss, as well as a traumatized tail. There were maggots crawling in and out the poor cat’s rectum, what remained of his tail, and a hole in his rear right paw. Moses appeared to be an aged cat, but further exam revealed that he was indeed a young cat… approximately 2 years old!

Mr. Brown wanted to give Moses a chance as well as everyone at GAC. Initially, the most important task was to get the infection under control and get Mo strong enough for surgery to amputate the remains of his tail. He had to have a blood transfusion (thank you R.E. Flory, owned by LVT Sheryl). and several days of fluid therapy, antibiotics, and other supportive care.

There was more than one scary moment when Dr. Washburn felt that we might lose Moses. However, he was a fighter and survived. Not only did he survive, he thrived!

Now, many of you have met Mo: the GAC clinic kitty. He oozes personality and loves to greet people. Unfortunately, he prefers people and dogs to other cats; perhaps he is afraid of friendly competition for attention?

Please say Hi to him when you come to the clinic and known that you have met a true “miracle kitty.”

Dr. W says “He was the closest to death of any cat she had ever treated that survived.”

Maybe cats really do have 9 lives!